So, this is how I roll when I'm doing a relationship spread. 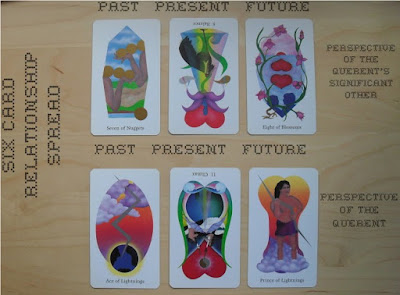 Sometimes I like to do 5 cards each instead of 3 - a card at the beginning to signify the situation before the relationship developed and one at the end for a more long-term outcome. It really depends on the querent's concerns.

For fun, I'm using the Love Tarot today. This is a deck my mum actually bought for me. I've been reading her fortune since I was 14 and I think she gets a little tired of the same old Rider Waite action so she likes to put new things in the mix. I will be writing little workshop blogs on each card in the Love Tarot but for today I'm just going to practice a reading.

So, let's say the querent has been with her boyfriend for 18 months and out of the unholy blue he's dropping hints about marriage, kids and matching rocking chairs after retirement. She's feeling the pressure and doesn't know if she sees a real future with him. She worries that he's becoming co-dependent. 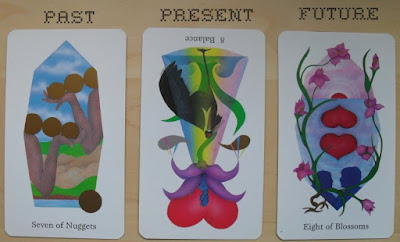 "The Seven of nuggets tells me that your boyfriend felt a lot more obligation to his own hobbies, interests and desires at the beginning of the relationship and that the two of you were doing pretty well at living your own lives as well as enjoying the new connection. This is why you're so freaked out at the sudden change in his behaviour and feel that the dynamic is threatened. Along with the Ace of Lightnings appearing as your past card, I can see that when you first fell for him it was sudden and intense - a lightning strike between two personalities - and your instinct to be protective over the state of the relationship is justified by this fantastic start. 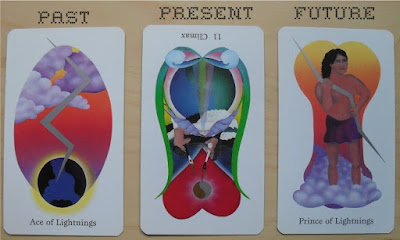 Balance Reversed suggests your boyfriend is upsetting the balance between you and is most probably conscious of that. The tension being caused is triggering some cold tendencies. Senseless arguments, self-righteousness and point scoring have started, normally at his instigation. But the card suggests he's actually not as sure of his direction in the future as you might think and the hint dropping about marriage could be his way of trying to maintain the closeness between you. It's a front - a way of trying to keep his grip on the situation. He's as scared as you are of losing something good and he has insecurities about his ability to be the best partner possible for you. You need to accept your share of the responsibility too, which is what Climax Reversed is indicating. At the moment the sexual side of the relationship is encountering problems due to your fear of fully connecting. You're not processing the deeper teachings and understandings that can come out of physical union and tend to 'switch off' at times. The card is warning you to let go of hang-ups and the desire to micromanage.

The future looks bright. The Eight of Blossoms tells of a positive shift over the next six months. His love still has more blooming to do and that will come with a greater understanding of your needs and perspective. Communication will become easier, he'll feel able to tell you what his worries and desires are and you'll be able to openly respond. Blossom cards are all about potential, growth and accepting that so much more is possible. He'll have a moment of clarity as he looks back over his time with you, he'll pinpoint the negative and dispose of it whilst enhancing the positive by being considerate and sincere. The Prince of Lightnings suggests more of an ability to be carefree on your side of things. You'll feel that desire to be spontaneous and daring within the relationship and you'll come to find him more attractive and interesting. You'll find a surge of romantic energy coming into play. He's still your leading man - this is just a rough patch."