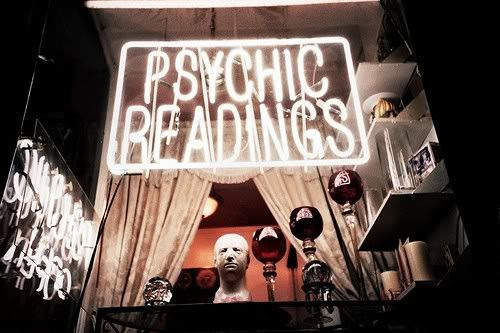 I recently asked some fellow Tarot readers for their views on the necessity of psychic ability in divination. When we approached the word 'psychic' and discussed its meanings, many of them said without hesitation that all human beings are psychic and that, in the modern day, we've lost our casual acceptance of this fact and forgotten to hone and heighten our psychic ability. It seems, from the results of this discussion, that there's a feeling that 'psychic' and 'intuitive' simply mean the same thing. The two words are seen by some to be completely interchangeable.

I've always known that my concerns about using the psychic label are largely down to semantics. In modern English language there's absolutely no doubt that 'psychic' has come to mean something more than intuitive, perceptive or spiritually awake. It's been commandeered by a very specific group of people who claim 'the gift'. If it's a gift, it doesn't seem likely that everyone has it. And more importantly, what that gift entails according to psychics involves things like talking to the deceased and seeing the future, both of which are things I can't claim to be capable of (nor would I want to be). Some elements of clairvoyance are simply part of human ability. For example, perceiving danger, foreseeing likely consequences and correctly guessing someone's darkest fears or greatest dreams. Some of us are particularly good at looking into someone's circumstances and interpreting the necessary action and likely outcome. I think claims of psychic ability go beyond this. Perhaps the word is used to aggrandize a simple human ability to be instinctively right, but why make intuition and acute perception into something more than the sum of its parts?

The fact is, 'psychic' is a loaded word. It comes with too much cultural baggage for me to feel it's applicable to me. It also suggests exclusivity. And intuition is anything but exclusive. It's available to all of us and it's something that can be learned, improved and expanded upon all the time.

Many of the Tarot readers who took part in the discussion said that they felt being psychic was a fundamental part of what it is to be human and that although many people say they're not psychic, the reality is that they are but haven't worked on it or acknowledged it. To me, this means that we have a great deal of reclaiming to do.

In Tarot 101, Kim Huggens has this to say about the psychic versus intuitive debate:

"Being intuitive is not the same as being psychic or clairvoyant. The latter two are focused on predicting what might happen in the future, whereas intuition is about seeing and identifying patterns in the world around us."

For me, 'psychic' and 'intuitive' can't be interchangeable. My practice as a Tarot reader has so little to do with those adverts in magazines for Genuine Psychic Readers. The whole culture surrounding psychic ability is largely one of convenience and exclusive membership. Being a clairvoyant is about having that elusive 'gift' whereas with intuition everyone is genuine because everyone genuinely possesses it to some degree. I could use the word 'psychic' but I'd have to constantly explain my way out of the stereotype people have come to attribute to it. And I suppose my question is, why bother, when there are so many other words out there that fit the bill?